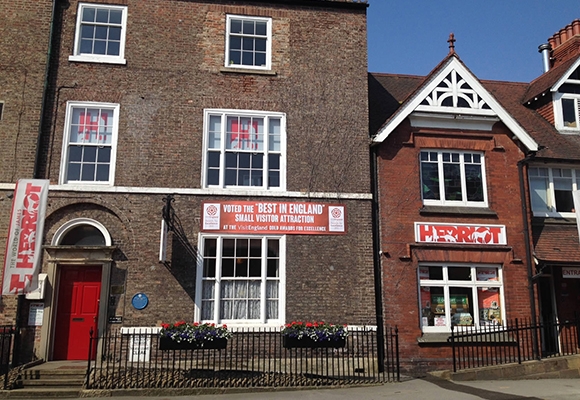 The James Herriot Experience is by far our most popular tour, and we pride ourselves on being the leading enthusiasts on the subject of James Herriot.

Our in-depth, fully escorted tours will take you into the original house where the world’s favourite vet lived and worked.

We will provide you with exclusive knowledge gained from tales and stories shared with us by James Herriot`s Son and Daughter, Jim and Rosie.

After visiting the Museum, walk down the aisle of the church where James married his beloved wife Joan,

Be driven through the spectacular Yorkshire countryside and stop off at Aysgarth falls which actually featured in the Kevin Costner film, Robin Hood Prince of Thieves.

Then the settings for the legendary television programmes, stopping at the Kings Arms Pub featured as Darrowby’s Drovers Arms (where you can enjoy lunch) in the TV series and Skeldale House which featured as James Herriot’s practice.

We then go through the famous ford at Langthwaite where the watersplash scene from the opening credits of the TV series of All Creatures Great and Small was filmed before the relaxing drive back to your hotel.

Features of the Tour:

Admission to attractions is not included in any of our packages.
1 Bottle of bubbly free with tour, Alcohol for 18+ only!
Additional refreshments as per drinks list.

Our selection of available Tours: (contact us if you have any questions

This site uses Akismet to reduce spam. Learn how your comment data is processed.